Nosy Crow's Kate Wilson on apps, print books, and the wisdom to know the difference

We heard from Loud Crow’s CEO and founder Calvin Wang a few weeks back. So it’s only fair that we jump the pond and speak with the other Crow on the children’s app landscape, Nosy Crow. Managing Director Kate Wilson, who had the wisdom to publish The Gruffalo at PanMacmillan back in 1999, took a few minutes out of what must be an insanely busy schedule to talk to DotMomming about apps, reading, and the shape of books to come. 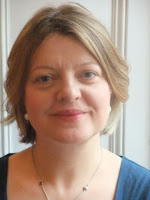 But first, let’s get up to speed about Nosy Crow, one of the many new publishing ventures on the scene in this rapidly changing world of books – specifically children’s books. Nosy Crow took wing in February 2010 and published its first traditional book in January 2011, the YA Small Blue Thing by S.C. Ransom. By the end of the year, the company plans to have 24 books for sale in the UK and five apps for sale throughout the world. The books are available in the United States and Canada under the Nosy Crow imprint from Candlewick Press, who will begin publishing Nosy Crow’s illustrated books in August 2011.

What sets Nosy Crow apart from many new app producers is the experience of its staff. While many houses see their top talent drawn from gaming and entertainment fields, Kate Wilson brings twenty-five years' experience as an editor.

DotMomming: How many of your books will be apps, how many traditional? And will you produce apps from paper books? And paper books from apps?

Kate Wilson: Twenty-four books will be either print only or (when they’re novels, print and e-book) and five will be apps only. There won’t be any overlap between the print books that we publish and the apps we bring out this year. This is because we believe that there’s little point in squashing a book that works well on the print page onto a phone or a tablet device: We think it’s much better to commission books that work on the page for that medium, and commission new kinds of reading experiences from scratch for digital media.

DM: Most apps on the market right now are digital versions of popular titles – the Dr. Seuss books, Sandra Boynton’s menagerie of board books. But Nosy Crow plans to release new authors and illustrators along with established names. There is some risk in launching new titles, as parents have a hard time wading through the sea of apps to find quality. What’s your strategy for getting the word out about unknown artists and authors?

KW: We really believe that this is a market in which really good products – well thought-through and well-produced, with a strong sense of the child and parent who will be reading the app – will shine out. We are active on Twitter and Facebook, and we talk about apps in general as well as our own on our blog. Our blog posts Appy Days and Digital Natives: Kids and Apps, for example, outline some of our app thinking. At the moment, there aren’t many people making apps that are reading experiences. While we are, to some degree, competitors, and while we have a range of philosophies and priorities, we are, broadly, mutually supportive, amplifying one another’s messages through social media.

DM: How do you find your talent – whether debut authors like S.C. Ransom or well-established names like the prolific Philip Ardagh and illustrator of the Gruffalo books Axel Scheffler?

KW: We accept submissions of writing, art, and concepts directly from authors. We have guidelines on our site. A number of our publications have been and will be the result of authors, etc. approaching us. S.C. Ransom is a good example. We receive submissions from the many agents  – mostly U.K.-based as that’s where we are – who represent writing and illustration talent. We know them because several of the people who work at Nosy Crow have been in the children’s publishing industry for many years (25 in my case). And because of our long experience in the publishing industry, some authors and illustrators have had good experiences working with us in the past and want to share the excitement of a new publishing venture. Philip Ardagh and Axel Scheffler are good examples of that kind of talent.

DM: Nosy Crow was in the news in March for signing with Candlewick Press to co-publish the majority of its titles in the U.S. and Canada. Could you talk about what this relationship means for Nosy Crow?

KW: Candlewick Press will publish the majority of our illustrated titles, starting in August. It’s a great thing for our authors and illustrators: They have, on the one hand, the personal, hands-on relationship they have with us in the UK, and, on the other hand, the highly professional advocacy, market understanding, and credibility of Candlewick, who sees the publication of its book in the United States and Canada not as a one-off title but as a longer-term connection. It’s great for us because it gives Nosy Crow a print presence in the United States. And it’s great for Candlewick, who have access to a range of talent that they wouldn’t have access to, while they can make good use of our social media engagement – many of the people who follow us on Twitter, like us on Facebook and visit our website are from North America.

DM: When you spoke at the Bologna Book Fair’s “Tools of Change” conference on March 28, you addressed the cost considerations publishers must weigh in app production. Could you speak to the issue of quality and the factors Nosy Crow evaluates before taking on projects?

KW: This is an evolving market, and we want to produce apps of the highest possible quality. At the moment, we are making the best apps we can, and we are not skimping on the quality of illustration, audio recording, or music. We are packing the apps with a high-level of interactivity – and we do our coding in-house. It is expensive, but I think that what matters is that you see every dollar we spend in the quality of what we do. 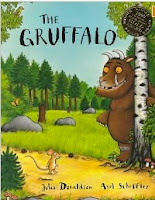 DM: Gruffalo author Julia Donaldson, whose book has sold gajillions of copies, recently nixed the idea of a Gruffalo picture book app. Donaldson is not alone in rejecting apps, as many authors, artists, and parents worry about the impact of digitizing libraries on kids’ reading and learning. Can you speak to that?

KW: We believe in the importance of reading for pleasure. We love the smell and feel of print books and don’t take any less pride in the terrific print books that we make than in the apps we are creating. We think, though, that there are circumstances in which the portability and interactivity of books on a screen are appropriate, and that, if a child is using a screen, we think that it’s important that there are really engaging reading experiences available on it. I was quoted in the article that Julia Donalson contributed to. I said that I entirely understood Julia’s view. Having published The Gruffalo, I think it’s perfect for the page.

However, I also said, "If parents and children are moving towards screens, I feel really profoundly that it is our responsibility as publishers to provide really compelling reading experiences that are at least as interesting as games. I think it's luddite and refusenik not to embrace where your readers are going. We can't be a worthy antique as an industry – we have to go where people are. If we turn our backs on that, other people will fill the space, and they won't be people who've had 25 years' experience writing, illustrating, and publishing the best children's books." 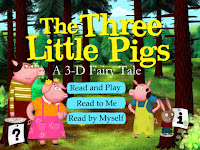 DM: Some app producers are comfortable blurring the lines, and when they are asked whether their product is a book, a game, or a movie simply reply, “Yes.” Your first app, The Three Little Pigs, shows great restraint in the number of whistles and bells included to tell the story. How do you decide how much interactivity a book needs?

KW: I think that’s a great question, and one we give really careful thought to when we are creating our apps. I think that what we are interested in is creating a reading experience, not a game. So, in The Three Little Pigs, for example, we didn’t want to interfere too much with the linear flow of the story, so there isn’t a point, for example, where you can break away to play a game. Instead, the additional layer of non-linear comments from the pigs deepen the reader’s sense of the character of the individual pigs. And many of the things that you can do progress the story – by tapping, you can help the pigs to construct their houses, or run away from the wolf... though you can also help the wolf to blow down the houses by blowing on the screen too.

DM: I live in a house with three young readers of books, the youngest of whom is learning to read via a screen as well as on paper. These children are digital natives, and they don’t share the same affinity for ink-and-paper books as their parents. They move fluidly from one medium to the next. Would you gaze into your crystal ball and share what you see for their reading futures?

KW: I don’t mind how they read; I mind that they are reading. Our role as publishers is to provide material that is really engaging to young readers, to motivate them to learn to decode as a necessity (it’s one of the key skills they need to be educated and successful) and as a pleasure.
Posted by Kate Hannigan at 6:59 AM