Amazon.com has just announced that it is now selling more Kindle e-books than print book ones—and that is paperback and hardcover combined. The day that seemed to be somewhere off in the future, when we would be hanging our jetpacks on the peg by the office door, has arrived. And sooner than anticipated.

Various news reports quote Jeff Bezos, Amazon's founder and CEO, addressing the speed at which this change is taking place. “We had high hopes that this would happen eventually, but we never imagined it would happen this quickly—we've been selling print books for 15 years and Kindle books for less than four years.”

Amazon is reporting that since April 1, it has sold 105 Kindle books for every 100 print books. The figures do not include free Kindle titles. Amazon's Kindle first debuted on the book scene in 2007. By 2010, e-books sales for the Kindle had passed hardcover print titles. Then by January-ish of 2011, Kindle e-book sales had surpassed paperback titles. 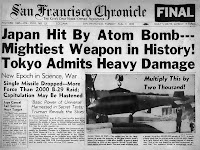 Some book traditionalists are in mourning over this development, fearing the death of the printed book. As a former newspaper gal, I totally get that. I interviewed for a job at The San Francisco Chronicle in 1997 and was asked if I actually believed readers would prefer to get their news on some "digital device" than by the beloved ink-and-paper form. I wanted the job pretty badly, so I said what I knew this editor wanted to hear (and what I wanted to believe) -- that people would always love the printed page. And now here we are. . . You can read more about the development online.

Others are cheering that reading is up and books -- in any format -- are being devoured.

For our kids, this might not register as much of a milestone. But for those of us on the fence, with a foot in either format, it's a moment to pause.