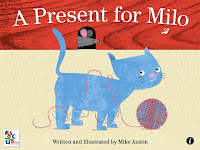 Mike Austin is a children’s author in an unusual and fantastic position. His first book that came out was a picture book app with Ruckus Media Group called A Present for Milo. It was well-received, and Mike was quickly hit up to make two more books, only this time with paper and a spine. DotMomming talks to Mike about his experiences as an author-illustrator working in digital and print formats.

DotMomming: A Present for Milo was written originally as a picture book app for preschoolers, and then, after it was out, you were offered a contract to turn it into a print book. That's not the norm these days. Could you speak to that highly unusual experience and how it came about? When can we look for the paper books on shelves?

Mike Austin: It's funny but it actually began as a traditional book.

I came up with the story about 15 years ago when my daughter was around two. One evening at bedtime we were wondering what our cat, Milo, was doing all day while we were out of the house. So I grabbed my sketch pad and started drawing the story. I liked the simple concept and character enough that I decided to make a book about Milo and his adventures.

The finished dummy sat on my shelf for years before I was contacted last April by literary agent Rubin Pfeffer, who had seen my illustration portfolio and asked if I was interested in collaborating on some projects. I of course said YES!

A Present for Milo was introduced to a number of different publishers, but it was Ruckus Media Group who saw it and thought it would make a great iPad app. I knew nothing about apps and thought what a great opportunity to learn about the process, thinking how cool it would be to see Milo come to life in an animated, digital form.

I worked with a great developer and art director at Sequel Digital. The project took about three months from concepts to finished app.

The app was launched in early December, and shortly after I was offered a contract to create two new Milo books.

DM: You landed literary agent Ruben Pfeffer? That cannot come out of the blue. Had you been interested in breaking into children's book publishing and been shopping your portfolio around?

MA: I have been working as a graphic designer/illustrator for more than 20 years, my wife Jing Jing Tsong also. And I've been an illustrator full-time for 10. I have portfolios at the I Spot, Workbook.com, picture-book.com, and a bunch of other places. I've won awards and all that. The majority of my work is editorial (newspapers, magazines, corporate publications) for a very diverse cleintele: The Wall Street Journal, The Los Angeles Times, MIT, Boy's Life, American Express, even the U.S. State Department.

Rubin had actually seen Jing's portfolio first and found me through her. I wasn't actively seeking representation, although I was very interested in children's book publishing from Day One. I have a bazillion ideas in my head, and when Rubin and I had our first conversation I almost exploded. Jing and I have always tried to present a positive, whimsical style in our work. Maybe that's what caught his eye -- I don't know exactly. But I have to say Rubin is a very brilliant and wonderful person who's helped us focus our ideas and make great decisions. It has been an incredible learning experience.

DM: How many print children's books have you done? And how many apps?

MA: A Present for Milo is my first children's book app. I'm currently working on two new Milo books that should be available the end of the year and a new series of apps for young readers that will also be available this fall.

DM: Traditional print books follow standard, 32-page formats, while apps seem to have no constraints. Do you prefer one medium to the other?

MA: I love working in both formats. I think it really depends on the story concept and how well the illustrations will work digitally. I love the flexibility that a digital format offers and also the instant gratification. It was so thrilling to send the page files to the developer and a few days later have a sample app with working clickables. Very cool.

DM: How do you feel kids experience your books? When you're creating a paper book, you have a reader in mind. And when you're creating an app, there are very different considerations. Could you share what your biggest priorities are when creating illustrations and text for the various readers? 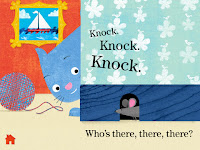 MA: I hope that kids are having fun and enjoy spending time with the story and characters. If they are engaged, entertained and learning than I've succeeded. That's my goal, to create something that is meaningful.

DM: Some critics feel that picture book apps blur the lines between a book, a video game, and a movie. What do you say to that?

MA: There are all kinds of apps out there, just like different kinds of books, video games and movies. It's the parents’ responsibility to choose the content that's most appropriate and be engaged in the learning process. Is A Present for Milo a movie? No. Is it a video game? In some ways yes because of the way the reader has to interact and click through each page. Is it a new kind of book? Yes.

DM: How do you think picture book apps are impacting early literacy?

MA: It's an exciting new medium that gives early readers a very fun way to experience both new content and the classics. That's what it's all about, finding new and entertaining ways to help young readers learn. Judging from the popularity of children's book apps, I think it's positive.

DM: What's ahead for you after Milo? Both in terms of digital book making and traditional?

DM: Many children's authors and artists are itching to break into this wild and unknown frontier of apps for kids. What advice do you have for them?

MA: It is a time-consuming process, and the development costs can be very high depending on the complexity of the project. For example, if you have 15 pages and each page has backgrounds, lead-in animations, and five clickable elements that each do five random things, you now have more than 500 illustrations! It's a lot of work, but if you have a strong story and a great developer, then go for it!
Posted by Kate Hannigan at 10:47 AM