The changes in publishing have altered the equation for every aspect of the business, for marketers, editors, agents, and bookstores, as well as authors themselves. Taking a break this week from picture book apps, DotMomming got ahold of Megg Jensen, author of the young adult fantasy Anathema (February 2011, DarkSide Publishing), to talk about e-publishing. 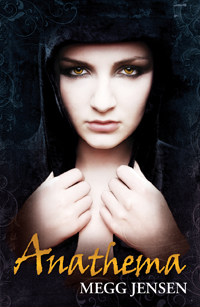 But first a little background on Megg. She has worked as a freelance parenting journalist since 2003 and began writing YA novels in 2009. Along with a few other writing rebels, she runs DarkSide Publishing, a sort of authors' collective that produces e-books. She blogs about writing while juggling freelancing, volunteering, and family life, and lives in the Chicago suburbs with her husband, two kids, and a miniature schnauzer.

DotMomming: Anathema is your first novel, and instead of going the traditional route of approaching the Big Six* publishers, you published a paperback book through CreateSpace that retails on Amazon for $11 and an e-book for Kindle & Nook that sells for $2.99. Can you tell us about that decision?

Megg Jensen: Anathema is the first novel I've published, not the first I've written. But it is the first novel I felt was worthy to send to agents. I queried it for six months, had multiple fulls requested, but failed to nab an agent. I was told YA traditional fantasy (no vamps or werewolves) wasn't popular and it would be impossible to sell the novel. A few agents even said, "But if you write another novel, please query me again."

When The Sleepers (coming out January 2012, DarkSide Publishing) was done, I sent it out to those agents who'd expressed interest in Anathema. Even more fulls were requested, and there were many more sleepless nights as I waited for a response. In early fall, I attended a conference in Naperville with fellow SCBWI member Karly Kirkpatrick. We skipped the final session and instead had a frank talk about e-publishing. She told me she was seriously considering taking the leap into self-publishing. I thought she was completely insane.

She e-pubbed her novel Into the Shadows in November 2010 and kept encouraging me to join her. I told her "no" so many times! I was set on getting an agent. The Sleepers was still with two agents, and I had sworn to myself I would not consider e-publishing until I had exhausted all of my "real" options. Over Christmas break I started reading more and more about e-pubbing. Then I read a blog post by LJ Sellers where she chronicled her decision to pull her books from a traditional publisher and e-pub. I talked to Karly more, and one day I had a lightbulb moment.

I wanted to choose my own destiny. I'd been told repeatedly that my writing was solid. I'd had agents offer to rep me if I switched genres. One agent even said, "You're a damn good writer." You know what? I finally believed what they'd been telling me. Maybe the market was too small. Maybe I really
was a great writer. If those two things were true, then it was time for me to take my career into my own hands.

I emailed the two agents who still had my full and pulled The Sleepers from them. (Insert gasp here.) One never responded, but the other spent an entire day emailing with me about my decision. She was sweet, helpful, and encouraging. She told me I was making the right decision because she knew that no matter how much she loved The Sleepers, that she'd never be able to sell it to the Big Six.

It's been nearly six months, and I have not regretted my decision once.

DM: While hitting with one of the big houses might make an author feel like she is set, there are countless authors who have received NO PROMOTION from the big guys. So the Big Six is no guarantee of big promotion. How have you promoted the book as an indie author? How is it being received so far?

MJ: Sometimes I feel like I promote 24 hours a day. Other days I take a break from promoting. Really, who wants to be bombarded with ads about my book? No one. What I have done is run contests on my blog, Facebook, and Twitter. I sent Anathema to book bloggers for reviews (yes, there are TONS of bloggers who will review indie novels). I met a lot of authors, particularly on Twitter, started a Facebook fan page, posted on my blog, attended book signings, and told everyone who's ever known me that I published a novel. However, I have only purchased one ad. Everything else has been 100 percent free.

Anathema has been very well-received. All of my sales outlets (Amazon, Barnes & Noble, Smashwords) have averages of four stars or higher. I have hit multiple bestseller lists on Barnes & Noble and Amazon - lists where Anathema appeared next to authors like Alyson Noel and Maggie Stiefvater. My
Goodreads average is 4.26. I can't complain.

DM: The digital book frontier feels wide open right now. But the quality is mixed. How did you go about the editorial process before releasing Anathema? How did you try to ensure a quality book with
real literary merit?

MJ: My editorial process is the longest part of producing a novel. I wrote a blog post about my editing process, but I'll break it down quickly: My novels run through at least five drafts. I have an SCBWI critique group, no less than four beta readers, and no less than two proofreaders. DarkSide Publishing, the group formed by Karly Kirkpatrick, Genevieve Ching, and myself early in 2011, is known for
its tough critiques - especially with the addition of West Coast author Angela Carlie. We all have mad editing skills. I utilize beta readers from my critique groups (some with MFAs in writing). I also have a children's librarian who beta reads for me. Her insights are invaluable.

DM: Amanda Hocking is on every author's mind right now. (Amanda is a self-published author who, as of March 2011, has sold about 1 million copies of nine books and earned more than $2 million in sales.) What made her books a success, in your opinion? And why does this route appeal to authors?

MJ: I'll be honest, I've not read any of Amanda Hocking's books. I do read her blog, though, and chat with her on Twitter occasionally. She's awesome. What made her books a success? I think it's a combination of things. She has quite a few books out, taking up a lot of virtual shelf space. She blogs
frequently about her life, not her books, which makes her accessible to readers. Word-of-mouth really helped her books skyrocket. Isn't that always the way it works? I heard about Twilight from multiple people. Same with Harry Potter.

This is why e-pubbing is so attractive. You can make a product, package it yourself, and sell it - knowing that what really sells is word-of-mouth. Is quality important? Of course it is! A book won't spread from reader to reader if it stinks. Some people cite full control as their reason for e-pubbing. I think that's a bad reason because if you take full control over your book and don't allow input, then it probably won't be as good. I take input from beta readers, proofreaders, and from my cover designer.

DM: Can you speak to book pricing, profit margins, and trying to make a living as a writer?

MJ: If an e-book is sold at $2.99 or above, it's a 70 percent profit margin. I liked the sound of that. However, 99 cent books and paperbacks make very little in profit. People need to understand that traditionally published authors have much lower royalties because they are paying into that amazing machine that puts out books like The Forest of Hands and Teeth by Carrie Ryan. There is nothing wrong with it; traditional publishing simply has high costs due to the agent's cut, publicity, promotion, editors, etc. This is the nature of the beast. It does not make it wrong. It's only different.

There is a TON of debate over the long-term financial ramifications of e-publishing vs. traditional publishing, but it's believed that with a higher output (three to four books a year) and consistent sales, an indie author will make more money in royalties over time. So much depends on whether a book hits it big. I will say that I easily cleared my investment in producing Anathema and am making nothing but profit now. According to a recent blog post by Mandy Hubbard, in 2011 I can expect to easily clear
a midlist author's first advance. Easily.

I am not the main breadwinner at my house. I'm blessed to be married to an engineer with a stable job, and we budget solely off his income. So every dollar I make is frosting. We like lots and lots of frosting. I wouldn't recommend publishing a book (traditionally or e-publishing) and trying to make a living off it. That's reserved for those few authors whose names everyone knows: James Patterson, J.K. Rowling, and Jane Yolen. Can that happen? Absolutely, but I don't think it's the norm, and no one should expect
it.

DM: The summer reading season is upon us, and I anticipate a surge in e-book sales as more young people devour books on reading devices -- despite the risk of sand ruining their iPads, Nooks, and Kindles. What is your take on e-reading, traditional books, and the shape of things to come?

MJ: E-books will only increase in popularity. My kids, ages 5 and 9, beg to get their hands on my Nook Color and my iPhone. They can manipulate technology better than some adults. E-books are the future. I'm not a book burning radical though. I love my paper books. I'm reading a hardcover right now (The Dark and Hollow Places . . . okay, so I'm obsessed with Carrie Ryan). I can't imagine ever fully giving them up, and I don't want to. Is the book world changing? Of course, that's the nature of society. Technological advances shape our world.

DM: Do you feel committed to this route into publishing? Or if a big house came knocking, would the traditional publishing routine lure you back?

MJ: Wow, if a big house came knocking tomorrow, would I give up e-publishing? They'd have to offer me an awful lot of money and really good royalties. Haha, so I guess the answer is no. (Insert another gasp here.) I really have no interest in giving up everything I've worked so hard for. I don't think authors who choose traditional publishing are wrong. This is my personal choice and path to follow.

However, I would love to have an agent, and while I've actually spoken with some recently, no decisions have been made. No, I haven't sent one query since last year. Yes, agents are interested in indie writers too.

* For those of us who love lists, here are the Big Six publishing houses. Keep in mind there are approximately a gajillion imprints within each house, but still. The going is tough. We wish you well.