Loud Crow Interactive, the digital book publisher based out of Vancouver, British Columbia, has just three apps under its belt, but already it's one to watch. Founded by a group of former video game developers with more than 30 years of experience in interactive media, it brings the most engaging elements of gaming to electronic books. And its collaboration with Sandra Boynton to bring her beloved stories to life for the iPad, iPhone, and iTouch guarantees Loud Crow will be regulars in the No. 1 spot at the App Store.

DotMomming checked in with Loud Crow's CEO and Founder Calvin Wang about apps, kids books, and the shape of things to come. But before we get started, we had to find out what's up with the crows: Loud Crow, U.K. publisher Nosy Crow, literary agency Upstart Crow.
"We get asked this quite a bit," said Wang. "Personally, I've always had a fascination with these black birds and there are lots of them where we live. It seemed like an apt name given that crows have also been part of children's storytelling throughout history. In fact, our first offering was originally going to be Aesop's Thirsty Crow fable."

DotMomming: Loud Crow recently announced a partnership with board book superstar Sandra Boynton for a new line of digital books. Will those follow the PopOut! design of your previous titles, The Tale of Peter Rabbit and The Night Before Christmas?
Loud Crow: It would be straightforward to take the interactivity from PopOut! and apply them to Sandy's board books. But her books are wonderfully special in their own way and as such, they deserve their own treatment. So we created an interactive style for Sandy's books which includes familiar elements from PopOut! as well as new elements that are unique to her line of books.

DM: Sandra Boynton is a prolific author. How many of her books will you publish in app format? And which titles are already in the pipeline? And how do you think they will be received? 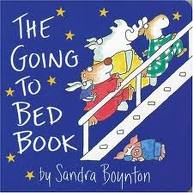 LC: It's been an absolute joy to collaborate with Sandra and her team, and we would love to bring all of her books to the digital realm. With over 50 books to her name, Sandy gives us a deep and diverse collection to work with, and we are extremely excited about the creative possibilities. We launched The Going to Bed Book in March, and it was chosen as iPad App of the Week in a few countries, which was great. And we just completed Moo Baa La, La, La! which is slated for release later in April.
DM: Loud Crow's beautifully designed PopOut! The Tale of Peter Rabbit earned a starred review from Kirkus in January. Now The Going to Bed Book does in April. As one of the most highly respected review journals in children's publishing, what do those Kirkus stars mean to you?
LC: It's always nice to receive that extra recognition, but being awarded the coveted Kirkus star was definitely a special moment. Kirkus Reviews has been critiquing books for almost 80 years, and the award helped to validate our approach with interactive books. It's great to see Kirkus embrace digital books the way they have.

DM: Could you talk in specifics about the making of the Peter Rabbit app? When I read it with my kindergartner, I pretend that lovely narration is Emma Thompson's voice. Do you hire celebrities to narrate your books the way, say, a Ruckus Media does?

LC: Some of our fans thought the narrator for Peter Rabbit was Renée Zellweger, who played Beatrix Potter in Miss Potter. I don't think it's necessary to use celebrities, although it can be a nice touch when there is a good fit. For example, The Going to Bed Book is narrated by British Invasion singer Billy J. Kramer, who was perfect for the role.

DM: For many parents who loathe picture book apps with too many whistles and bells, Peter Rabbit hits just the right balance. The digital lift-a-flap features are adorable and nod to traditional pop-up books. My son could not get enough of the blackberries and leaves that enlarge when tapped. How do you decide on the right balance of tricks and text?

LC: The amount of  interactivity to include is something we scrutinize with each and every page of a book. It's not always easy to know when you've achieved that balance but having a strong vision about the user experience definitely helps. When we designed Peter Rabbit, one of our creative filters was authenticity, and we worked hard to ensure the original reading experience was preserved as much as possible.

LC: Absolutely. Working with established authors and titles means better recognition, but it isn't a prerequisite for great content. We definitely have plans to support new authors, and I wouldn't be surprised to see us release some original content in the coming months.

DM: One of the issues with picture book apps is quality control. While traditional publishing houses have directors for editorial content as well as artistic content, many app publishers do not. What is the team like at Loud Crow? Obviously you have talented designers, but what about editorial concerns?

LC: That's a great question. At Loud Crow, we don't have an editorial department, per se, but this will change as we tackle more original content. At the same time, with digital books, the notion of quality becomes multifaceted; it can span many disciplines including writing, illustrations, interactive content, and programming. As a result, I think the notion of an editorial department will also evolve to reflect the characteristics that embody a digital book product.

DM: For many parents and publishers, digital isn't only the shape of things to come, it's the here and now. How do you think iPad and the wave of e-readers are changing children's experiences with the book? And what do you see as Loud Crow's role in it?

LC: We're extremely excited about the digital frontier as it relates to children's literature. The burgeoning market of mobile and tablet devices like the iPad means new possibilities for content and interactivity that never existed before. As a leader in the interactive digital book space, Loud Crow is going to continue to leverage what the various platforms have to offer in order to raise the bar both in terms of innovation and quality.

DM: Got any predictions for the next two to three years in kids lit?

LC: I don't think physical books are going to disappear anytime soon. But there will an increasing amount of children's literature consumed digitally, whether it's in the form of apps, e-books, or even Web content. Digital books is still a relatively nascent phenomenon, and I expect we'll continue to see a proliferation of platforms and formats before the market settles into a more stable state with fewer digital book formats and standards.
Posted by Kate Hannigan at 10:21 PM