It would be easy to sum up Let Me See. . . What Will I Be? in a single word: adorable. But there's much more to the story about Miss Rosie Red than first meets the eye. 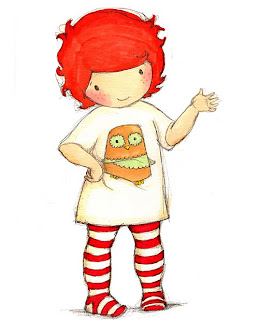 Written by Northern Ireland author-illustrator Trisha Deery and produced by Derry media company Dog Ears, What Will I Be? was released simultaneously as an app and a paper book. It features the curious Rosie, age 3-ish, and her delightful two sidekicks, Baby and a cat named Cooper.

The story is simple. Rosie has been invited to a birthday party and must decide what she wants to be for it. An astronaut? A fairy? A dinosaur?

The narration is sweetly performed by a young child, and my three kids could not get enough of it. The book is geared for the youngest appsters, but older readers will get a kick out of this toddler's antics. My six-year-old ate it up, taking joy in what the young whippersnapper Rosie was up to. 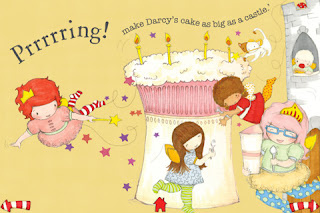 Darling illustrations of Rosie and her friends dressed in each possibility offer just the right amount of interactivity without letting little fingers lose track of the story. The emphasis is on Rosie and her excitement about going to a birthday party, and the resolution is spot on.

Miss Rosie has a strong appeal, and her charming companions Baby and Cooper create an irresistible triple-threat. Dog Ears reports the possibility of a TV show in the works, along with more books. What we liked best about Rosie was that her dress-up choices were not stereotypically girlie. Sure, the fairy option was a sparkly pink froth, but it was balanced by Rosie as a dinosaur and as an astronaut.

There is an air about this character -- resplendent in her striped red tights -- that is reminiscent of a certain pig with a big personality. Here's hoping we see more of Miss Rosie Red. With all this potential, who knows what she will be.

$2.99 for iPad and iPhone; paper book available in English and Irish

Posted by Kate Hannigan at 3:05 AM