Another Card-Carrying Member of the CPL 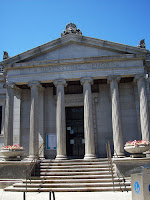 I stopped by the Blackstone Branch of the Chicago Public Library the other day with the kids in tow. It was one of many stops on a hot day full of errands to the dry cleaners, the grocery store, the pet store, and the coffee shop.

"Why are we sitting down?" asked my six-year-old, resting his head on the wooden table.

"Because we need to fill out this form," I explained. "You're getting a library card today."

He wasn't going for it. He was hungry, he was tired, and he was desperate to get home and back to playing with the dog or staging battles with his knights. Anything but having to sit quietly at a table and perform some writing task.

And as with many young boys, reading and writing are not his default settings. Neither activity comes easy to him. Despite a summer spent immersed in books, he's not a confident reader. And as for his writing ability, fine-motor skills are not his strong suit.

"Why can't we go to the library where you bought me Bad Kitty?" he argued.

"Because that's a bookstore, and we have to buy the books there," I said with a peppy voice, though he was not so swayed by my enthusiasm. "A library is where you get to read the books for free."

Clearly I need to work on money management with my kids. Because "free" doesn't seem to have the same motivating effect on them as it does on me.

We got in line and waited for our turn at the desk. Big sister and brother joined us, heaving their own deep sighs and obviously wishing they were somewhere else, too. 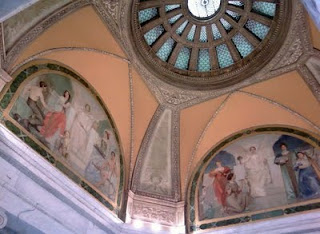 "Gabriel," he said in a deep and somber voice. Then he paused for a few beats, reading over the application form my almost-first-grader had placed on the counter. "Gabriel, you did a wonderful job writing your name."

Suddenly, Mr. Cranky Pants stopped slouching. He stood a little taller in his sneakers. His brother and sister quit their fidgeting and gazed up at Elbert, too. Both seemed keenly aware that Gabriel was having A Moment.

"Sometimes, people fill out the forms, and they are messy," Elbert continued. "Your G is perfect, and both your Ss are facing the right way. Not everybody gets that right."

Gabriel nodded with a gravity I'd never witnessed in him before.

As Elbert explained the borrowing privileges Gabriel was now granted, I looked around at the cathedral-like setting that is the Blackstone Library -- the first branch in the city's library system. Unlike the contemporary design of many suburban libraries, patrons stepping through the doors here are met with a stunning rotunda flanked by four murals depicting labor, literature, the arts, and agriculture.

And like a cathedral, it inspires a sense of reverence.

The line behind us began to stack up, but Elbert didn't rush us along. He printed Gabriel's name out in bold block letters and had him check it for mistakes. Then when it was ready, Elbert presented the green and white plastic rectangle to Gabriel with all dignity and respect it deserved.

There are few cards as powerful as a library card. Not only because libraries play such a crucial role in maintaining a democracy and supporting an educated populace -- all highfalutin notions. But for a child, it instills their first sense of community and belonging.

"Congratulations, Gabriel," Elbert said. "You are free to use the Chicago Public Library."

Now, the reverence I feel isn't just for our beautiful library building. It's for the Elbert Pattersons of the world.
Posted by Kate Hannigan at 5:05 AM