Summertime means good reads at the beach. And while I'm all for lazy days spent with noses in books, I am not so game for plunking the ole iPad down in the sand. So these recommendations are for reading in big, overstuffed chairs rather than on fluffy towels. And hey, this way there's no gunky sunblock to worry about.

I'll kick this post off with a quick confession: I am easily overwhelmed. Not in the meltdown-in-a-crisis sense -- I'm pretty good to have around when there's blood. But I am fairly worthless in a crowded supermarket. And don't even think about taking me to Macy's. I go catatonic amid all those choices. The same goes for searching for books in the iTunes store. How do parents do it? There are so many choices, I wind up making my decision based on a postage-stamp sized image -- "How cute is that little bunny?" And as we all know, we can't judge a book by its thumbnail.

I've put together a quick list of my favorite picture book apps and why your wee reader might enjoy them. From tried and true classics to delightful surprises, these are the books my crew has enjoyed and continued going back to again and again. . . when they can elbow me off the iPad and climb into that overstuffed chair.

Before we start, I'd like to share a few websites worth checking out. These have helped me find my way to some good books. Digital Storytime is one -- a husband-wife team devoted to reviewing picture book apps and rating them. I wish there were some sort of categorization to the list rather than a daunting 200+ titles to scroll through. But hey, it's a great start. Kirkus Reviews is the gold standard for book recommendations. They review picture book apps as well as traditional books, and you'll find a few categories here like "iPad Apps Under $5" and "iPad Apps With Animal Characters." Another site we love is GeekDad, which aside from writing wonderful reviews of apps for children also offers terrific insights into all things techie.

Now, a quick list of DotMomming's recommended reading for summer and beyond -- our selection of the best in picture book apps. 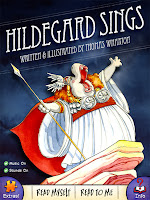 1) Best in Show: Our favorite picture book app right now has got to be Hildegard Sings, from One Hundred Robots. In a single word, it is delightful. Waitress by day, opera singer by night, Hildegard dreams of being a big, BIG star someday. But when a bad case of jitters makes her voice disappear just before singing for the queen, she searches for something to help her take the stage. This story is based on a 1993 picture book of the same title. It is a complete hoot, and the imaginative animations heighten the humor. Most memorable moment: Madame Zelda's hypnotic eyes and her crystal ball. A guaranteed crowd-pleaser. $1.99 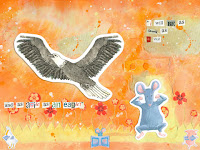 2) Beautiful: We could not resist the delicious cut-out lettering and illustrations in Fierce Grey Mouse from Tizio, beautifully created by author and illustrator Chantal Bourgonje. It's the story of a little gray mouse who wants to be fierce for an afternoon. He practices his pouncing. He drinks all his milk and eats all his porridge. He roars and lifts weights and dutifully does all his homework. He really does become quite fierce. But he soon learns it's a little lonely when you have that much attitude. Just the right amount of interaction to balance the text. And while the lettering cut from magazines and papers is lovely, it might prove challenge for early readers to decipher. Good for confident readers. $2.99 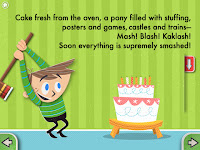 3) Thriller: We have to go with Nash Smasher for this one. This clever little book from Crab Hill Press is laugh-out-loud funny. We could not get enough of the whacking, smacking, wrecking, and overall mayhem we could unleash with our new friend Nash. And when trying to set things right again, the mismatched toys were a riot. This is a book kids will go back to again and again. The overall tone is lively, the illustrations are vibrant with a retro feel, and the interactive devices are clever: turn a dial to see Nash's spiraling confusion, slide a tab to mix and match toy parts. The narration and music are first-rate. Crab Hill knocks it out of the park with Nash Smasher. $0.99

4) Classics: We like Ideal Binary's pop-up versions of Grimm's fairy tales. Check out Rumpelstiltskin, Rapunzel, and Red Riding Hood from this Dublin app developer. What won us over was the actual reading required -- it feels like a book. Interspersed between the text pages are engaging activities -- planting seeds and watering flowers in a garden, packing supplies into a basket, helping Red tidy up her room. $3.99, in English, French, and German 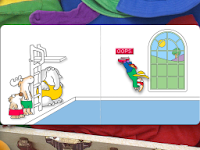 5) For the Diaper-Set: We've tried to steer clear of the big names and direct your clicks toward some fresh talent. But we would be remiss to overlook Sandra Boynton and the role her books play for the diaper gang. So our pick for the youngest iPadders is the third Sandra Boynton app from Loud Crow, Blue Hat, Green Hat. Young readers get the hang of this book immediately and revel in the chance to call out "OOPS!" when the clueless turkey makes a dressing mistake. With this picture book app, every time the reader touches the “OOPS,” they are rewarded with a surprise. A must-have for any preschoolers' library. $3.99

6) Early Reader: The Zany ABC of Naughty Names from iStoryTime is one of our favorites. It's a great vocabulary builder as readers tap their way through the alphabet, creating amusing three-tiered creatures from a selection of adjectives and nouns, like a "Tyrannical Urban Vulture" or a "Howling Fuzzy Yeti." For my three kids, who at ages 6, 9, and 11 read at significantly different levels, this picture book app allows them to gather 'round the iPad together for some serious laughs. The word choices are not predictable, so the sixth-grader gets a kick out of it as much as her soon-to-be-first-grade brother. Take that, "Lamentably Mealy-Mouthed Inspectors." $0.99
7) Don't Miss: William Joyce's The Fantastic Flying Books of Mr. Morris Lessmore from Moonbot Studios is breathtaking in that it blurs the line between picture books and animated film. It simply has to be seen to be believed. $4.99
Posted by Kate Hannigan at 5:05 AM