Behind the Scenes With 'Bobo'

When judging the Cybils last year, we fell in love with a little app called Bobo Explores Light, from the developers at GameCollage. Through dazzling animations and fun interactivity, Bobo took readers on an engaging exploration of one of science's major concepts: light. Since that time, the adorable little robot, Bobo, has lingered in our mind. And we've wondered who and what was behind this impressive project. So dotMomming reached out to Juraj Hlavac, the founder of GameCollage and former Microsoft software engineer, to learn more about Bobo.

dotMomming: How did you come up with the idea for Bobo. Is it completely original, or was it a paper book first? What were you hoping to accomplish? Can you speak to the "ah-ha" moment when you first decided to try your hand at an app?

Juraj Hlavac:I grew up with a Czech translation of a book for kids by Joe Kaufman, entitled Why and How, that explained how things worked. The details were simplified, but the concepts were accurate. I loved that book. I remember spending many hours flipping through it examining the insides of airplanes, tracing the force lines of levers and pulleys, and generally getting excited about the science of things. Many years later when the iPad first arrived, it occurred to me that it would be the perfect medium to convey that same set of ideas except in a way that was much more interactive. The levers and pulleys could actually move this time! 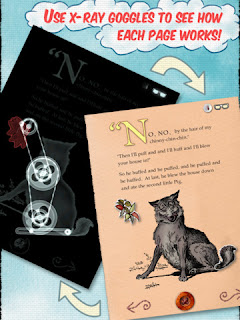 I started exploring those concepts with an interactive book I created prior to Bobo. I took the story of The Three Little Pigs and spruced it up with mechanical elements that moved individual pictures around the page. However, you could also active an X-ray mode, that allowed you to see the actual mechanical gizmos underneath.

With Bobo I continued to expand on that concept. However, to make the content more enticing, I thought about introducing a robot to be your guide. The idea was to inspire kids about learning by giving them a companion to befriend that would share their adventure. I ran the idea by my brother who has always been a huge inspiration to me and as soon as I mentioned the robot to him, he blurted out: "Ah...  And his name should be Bobo!" So that's how the robot was born.

The scale of project was a little daunting for a single guy working out of his home office. So I paired with two very talented individuals, illustrator Dean MacAdam and writer Craig Fusco, who helped me bring the app to fruition. It took us seven months of hard work to put all the pieces together, but we were very excited about how the final product turned out. 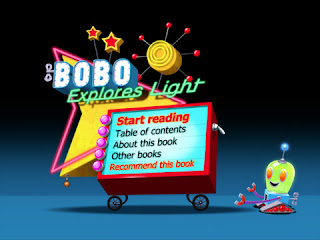 DM: Bobo was a serious contender for the Cybils Award for best app. What set it apart from the crowd was the incredible use of technology to serve the reader, a child. Did you have young readers in mind as you created the book? Did you build off of familiar approaches with children's books? Or did you scrap everything that came before and look at Bobo as completely original?

JH: The idea behind Bobo was to push across all fronts - technological, visual, and educational.  We weren't chained to existing content that we just needed to adopt into the digital medium, and that gave us a lot of freedom. The iPad offers tremendous advantages over other technologies because of its portability, extreme ease of use, and computational power. As a result, it opens up all sorts of options that allow apps to depart from the traditional approach of "books," especially when it comes to education, and we wanted to explore those possibilities to their fullest.

One of our goals from the start was to engage a wide audience of children. We structured an enormous amount of content in a non-linear fashion that allowed kids to dive into each topic the app discussed at whatever level was appropriate for them. For example, my two-year-old nephew loved to navigate to the disco page and dance along with Bobo without having any real interest in the science behind it. At the same time, older kids have the option to dig deeper into a given topic through a range of supporting articles, narrated slide shows, and some pretty awesome videos whose authors graciously donated their work to the project.

I think at the end, we arrived at a product that begins to explore what iPads could mean for education, although there are still many more avenues to explore in this genre.  And that's what we plan to focus on next.

DM: Who were the players who helped create Bobo? GameCollage is a "small and nimble" company, can you talk about what skills your group brings to the table?

JH: At it's core, GameCollage is a one-man-show, consisting of me and my single laptop. It's actually quite surprising what one can crank out with that little machine. However, for the Bobo Explores Light project, I've partnered with the writer Craig Fusco and illustrator Dean MacAdam as I mentioned earlier. This collaboration freed me up to focus more on the concept design, project development, sound design, and marketing and PR once the app was finished.

I think the No. 1 skill I like to foster in myself as well as in the people who join me is the ability to wear multiple hats at the same time and be willing to dive into disciplines outside of our comfort zones. We never had to outsource any part of the project to third parties and managed to produce all components in-house - from sound design, through video production, to PR and marketing. That flexibility allowed us to operate on a shoestring budget and still manage to turn profit without having to resort to external funding. To me, a functioning company is one that is self-sufficient so rather than making large claims and failing on the promises, my goal was to start small and build from ground up.  So far that has been a successful strategy and I'm excited to continue going down this path.

THERE'S MORE! LOOK FOR PART 2 OF THIS INTERVIEW NEXT WEEK AT DOTMOMMING.
Posted by Kate Hannigan at 8:20 AM