Any mother with a child under, oh, 30 years of age has probably held a Sandra Boynton board book in her hands. Since emerging on the scene with her adorable “Hippo Birdie Two Ewes” greeting cards back in 1975, Boynton has been wowing millions with her charming illustrations and wry sense of humor. 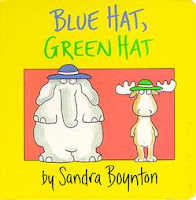 Let’s face it, her 1982 board book Blue Hat, Green Hat is comic genius.

So Loud Crow Interactive has just hit it big, think hippo-sized ginormous, by partnering with Boynton for a new line of picture book apps. The first, which has sold more than 5,000,000 copies (those zeroes are correct) in print form, paraded onto digital bookshelves earlier this month. And DotMomming was not disappointed.

The Going to Bed Book app features Boynton’s familiar menagerie of pigs and bunnies, bears and elephants as charming as ever. Loud Crow keeps them center stage, letting kids (ahem, or the adults reading with them) interact with the animals as they go through their bedtime routines.

Tap on individual critters to hear subdued animal sounds on some pages, musical instruments on another. Turn on the water during bath time, and watch the bubbles float across the screen. Little fingers will quickly figure out how to pop them, and there you'll sit for a good long while.


Boynton has a thing for pajamas, so it's only natural that her app lets kids interact with them. Tap on a bureau drawer on the "find pajamas, big and small" page, and jammies of all kinds explode onto the page and drift into piles like autumn leaves.
We linger longest on the toothbrushing page. Touch the faucet handle, and the water turns on, filling the screen with steam. We can't move on until we've both written messages on the steamed up page.

Each reading uncovers more engaging features, from hanging up the elephant along with his bath towel to lighting up the night sky one star at a time. Loud Crow has created a luxurious app that taps into Boynton's giddy sense of humor and mines it for more comic fun. It's a joy to share with a child. 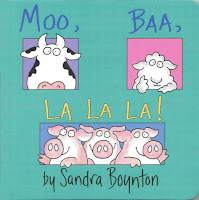 For parents of infants, Boynton board books are as essential as a binky. Tuck one into a diaper bag for on-the-go entertainment (and the occasional teething moment).

But for emerging readers, Boynton books are something special to encounter. Their spare word count is just enough to let a new reader feel a sense of real accomplishment. And the language is silly, surprising, and giggle-inducing, which sure beats a boring old rat that sat on a mat.

And there is no better place to start little guys reading than Moo, Baa, La La La.

As with most apps for this age group, readers can choose how they want to experience the book. With The Going to Bed Book, they can tap “The Big Guy Reads It” and listen to the soothing, not-quite-gravelly voice of legendary British Invasion rocker Billy J. Kramer. (Visit his website to learn how Boynton and Kramer connected.) Once they’re feeling confident, burgeoning readers can select “I want to read it myself.”

With Boynton’s deep roster of books, we can only guess what’s next from Loud Crow. But one thing we can assume with confidence is that the quality will be there. And just like her wild-eyed and wacky animals, that makes us smile. 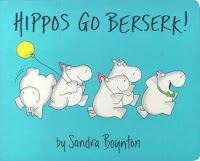 Posted by Kate Hannigan at 8:46 AM