Kirkus Reviews, the curmudgeonly review journal that looks at more than 500 books each month, has moved into app-land. And not a moment too soon, when I consider some of the stinkers I've recently purchased in the iTunes store.
Last month Kirkus began reviewing picture book apps -- from tried-and-true classics to brand new titles created just for the iPad. About 50 apps are already reviewed on the site, and a Top 10 list highlights their faves. Also in the works, according to a press release, is a discovery engine for the iPad that will feature app demonstrations along with interviews with authors and developers.

"Parents will have the opportunity to hone their search by answering 5 quick questions about their child. Kirkus will then return a selection of book apps to match their child’s interest. The questions include gender, age, price range, visual interests, and interactive elements."

Think of it as your neighborhood children's bookseller, who has gotten to know you and your child's interests over the years, only now the chit-chat is cut a little short. 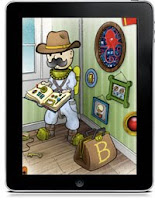 That Kirkus is venturing into this terrain is not all that surprising, as this is the future of reading. But that it is reviewing -- and giving stars -- to material that some diehards would not dare call "a book" does raise an eyebrow. Here's an excerpt from a starred review of Bartleby's Book of Buttons:

"Less a straight-ahead storybook than a combination of story and interactive puzzles, each page includes lighted buttons to press, keys and cranks to fiddle with."

The book app discovery engine, which will be available in March, is part of the journal's repositioning since its purchase last year. While some authors still smarting from scathing Kirkus reviews quietly cheered its seeming demise in late 2009, parents, teachers, and librarians who need help slogging through bookshelves (both the wooden kind and the digital ones) have a lot to be grateful about.
I hope to make good use of it. Now, if only I could take those stinkers I downloaded earlier this month and resell them at Powell's.
Posted by Kate Hannigan at 2:07 PM